WIP : the verse may lie if the chorus is pretty 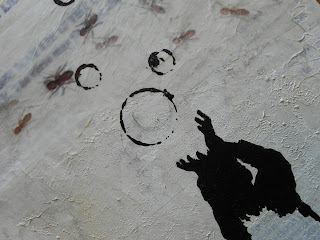 A work in progress, the verse may lie if the chorus is pretty (acrylic/collage on wood), is my attempt to make some kind of sense of a culture mandated by commercial concerns and "choices" jammed down our collective throats by the voracious plutocratic powers that, in fact, control EVERYTHING. The title was supplied by a song by crazed Blakeian wildman Julian Cope. (detail above)
Posted by ether^ra at 5:35 AM No comments:

Jason R. Butcher is a musician, visual artist, and teacher who resides in Atlanta Georgia. His music, produced with the Buchla Series 200 Electric Music Box, can be harsh, grating, and chaotic, seemingly the polar opposite of the man whose words are so measured and eloquent. Mr. Butcher wrestles with his instrument creating self-generating patch systems that seem to be devoid of humanity but nonetheless present the listener with a sonic pantheon of experience...to paraphrase William Blake, the road of excess in this case does lead to the palace of wisdom indeed. For more go to http://fastheadache.blogspot.com/
1. Given your background as a visual artist how does that experience and
creative process influence your music-making?

My background as a visual artist informs a great deal of what I do with my instrument, and generally speaking I feel most of my goals have little to with what one might associate with music making or songwriting. Instead, I often use the system as a drawing tool operating in the realm of sound. The very physical nature of the modular synth, and the way it can be configured through a wide variety of approaches has always appealed to me. Most of my art centers around figures that are somehow conflicted or deformed, often moving erratically or tangled in tense or uncomfortable environments or moments. My approach and goals when working with sound are nearly the same, and the process is equally as satisfying to me as an artist.

2. I noticed Cardew plays a role in your newest visual work; is his
influence musical per se or is it related solely graphically?
The influence of Cardew on my recent animations stems more from the graphic nature of his score Treatise and his writing than his musical output or renditions of the Treatise score, etc. The socio-political aspect of the writing and how his concerns about society and culture could be adapted visually to particular pages of Treatise that resemble barren sci-fi like landscapes was the genus of the project. I had already set about animating cycles of individuals affected - afflicted really - by harmful elements of the atmosphere. Some portion of this reflects my own sentiments about unsustainable populations and the impact of our presence as a species on this planet.
3. Could you tell me something about your "Chaotic Synthesis Recording
#3"? Is this a direction your work or your cooperative creative activities with
Don Hassler will follow?
Chaotic Synthesis Recording #3 was a response to Dan Slater's article in CMJ some years back that had been influential to me and others mining similar sound territory. I also wanted to work through a number of modules individually as limited sets of functions in order to familiarize myself with specific behavior of my system's operation. I'm looking forward to exploring the other techniques described by Slater in the article - as a cross coupled Buchla 258 dual oscillator only equates to a small fraction of the territory he describes - and hope to create additional, thematically related pieces in the future.
My collaborations with Don Hassler are usually extensions of our conversational exchanges and are often based around our processes, approaches, and/or particular examinations associated with some module or another. Most notable of these conversations is probably regarding the 'Self-Playing Patch', or 'Noodle' as it is sometimes called by some - a patch which is constructed and then recorded, or experienced, without additional patching interaction for its duration. The process can have many intriguing aspects - usually when composing a self-playing patch I'm attempting to create a system which varies dynamically, a sort of a tangle of energy or energies that might spread and contract across several axes or dimensions. The number of lines creating this tangle can be great or small, and entire tangle may vary as a system (such as along an overall trajectory). Also interesting to me in the moment at which the patching ends and the recording ends. Sometimes a few moments after pressing record the patch begins to destabilize, or perhaps its components become too obvious (or rather the ears aware) and the illusion is destroyed - much like a painter working in some fluid medium, setting it up on an easel to photograph, suddenly finding one of the colors wasn't quite dry and has started to bleed... 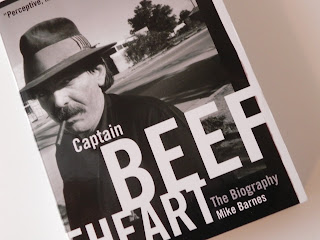 Wire contributor Mike Barnes' biography CAPTAIN BEEFHEART (Omnibus Press) presents the reader with the curiously entertaining, and sometimes sad tale of Don Van Vliet, that is, Captain Beefheart, musician, visual artist, poet and control freak. With the death of the Captain a month or so ago, Barnes' words become especially poignant... "the extraordinary story of a counterculture legend," written with the participation of many of the creative musicians who populated Beefheart's group during his active years, this 360 page critical history is a compelling read. From blues to free-jazz, from arguably his masterwork 1969's Trout Mask Replica, through a few horrible stabs at commercial viability, this book presents the whole story in mesmerizing detail with no stone left unturned. Thank Mike Barnes for a perceptive look at an artist who left us several surreal gems that continue to amaze and dazzle a new generation.
Posted by ether^ra at 10:54 AM No comments: 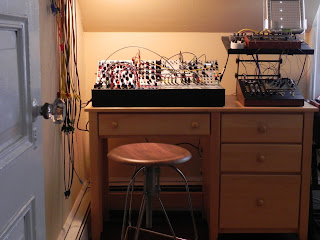 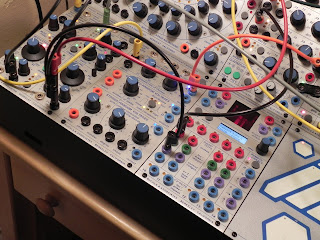 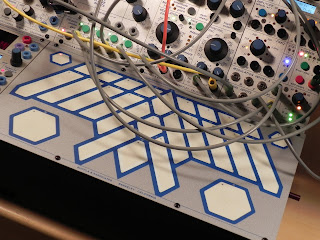 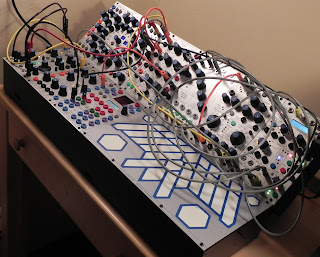 With great excitement and some trepidation I begin to scale the learning curve and the notoriously vague Buchla module "manual" information in order to make a kind of twisted sense out of these powerful modules: 222e, 259e, and 266e. With a blissed-out expression that suggests nirvana I proceed, twistedly uncertain, in search of timbral chaos as only a guitarist can!
Posted by ether^ra at 3:14 PM 3 comments:

Dmitry Morozov is a young circuit-bending electronic instrument designer who resides in Moscow. He is also possessed by an ever-evolving creative spirit and genius that provides the catalyst for art installations, glitchy musical presentations, and a seemingly endless ability to create his ::vtol:: line of synth/noise generator/effect processors that produce a glorious cacophonous din. I met him in April 2010 at Brooklyn's Bent Festival and found him an affable young artist with a quick wit and an easy smile. I've purchased a number of his instruments and have kept in touch, watching his creativity grow from afar. I interviewed him via email.
As an ever inventive artist/musician/instrument designer, what in your background has allowed you to evolve into a kind of 21st century renaissance man?

I was born in very humanities-oriented family - both my parents were historians, but both grandfathers and grandmothers were engineers (technical education was much more popular and prestigeous during soviet time). And all my grand parents had a big role in my upbringing; that's why I had both influences - technical and the humanities. Since I was 8 years old I was big fan of airplanes (one of my grandfathers is a aircraft designer. I started to collect models, photos,and books and visited special shows, museums etc. I was really bewitched by these huge and beautiful machines (as I still am), but I was not very skilled in exact sciences; that's why in my teenage years I started to search for something else. Airplanes supplied me with a big lesson, that is, that technical ideas should be beautiful and rational at the same time. But only later did I understand how important this influence was, and started to understand why I like Futurism and the Russian Avant-garde so much. When I was 15 years old I started to learn guitar - I was always a big fan of electric guitar music - from rock to jazz. Pink Floyd and the guitar helped to open a new door in my life - the world of sound.

A Russian university education gave me very good but very specialized education. When the time came to chose my profession I had no idea what I wanted to do - so I decided the smartest choice in terms of specific specialisation was Art History...and I was right!

I want to say that my Russian University education gave me a very good but also very particular specialisation, as it is in so many specialisations, but I didn't want that!...and that's why I choose Art History which gave me a very broadly defined education! If you study math you will be good only in math; if you study philosophy you will only be good in that in Russia. I wanted something more universal like a classical university education in Europe during the 18th century when study encompassed everything at the same time.

So thats how art, music and technical ideas connected together for me. In art I was always interested in "straight corners" (architecture, Mondrian,the Russian Avant-garde ), With my interest in airplanes I started to study the history of mad projects and non-realized fantastic ideas and in music I started to use all my background to connect art, engineering and my love of experimental music.

Russia has played an important role in the history of electronic music with the theremin and the mysterious ANS synth; what effect has this history played in your artistic development?

Well I know Russian history very deeply - as I said I was born into a family of historians. And I was always interested in understanding all these paradoxes of Russian life - they are everywhere - contrast between poor and rich, smart and stupid, brave and cowardly... It was always very hard to live in this country because of these paradoxes… The lives of both Lev Theremin and Evgeniy Murzin(inventor of the ANS synth) was full of these paradoxes - I have read many books and articles about them - and of course I'm very impressed and inspired by them - they both are real Russians; they had very hard and interesting faith, real genius!

What does the future hold for you as a sound artist and your fine ::vtol:: synths?

Hard to say - but I am 100% certain that I will create something no matter if it will bring me some money or not! I have many ideas for new synths, performances and art installations. I hope I will have enough time and strength to realize them all and generate new ones. I always have the feeling that I'm just in the beginning - I don't look back; I just try to always move forward vigorously.
For more information go to: samoletuvvp.narod.ru/​vto/​diy/​vol.html
Posted by ether^ra at 5:34 AM No comments:

ether^ra
I am a visual artist with an interest in sound/music who records under the project name ETHER^RA.